SHOULD WE SHOW COMPASSION?

GREENFIELD — The story of a couple who were found dead inside of a tent at a homeless encampment has led to questions in the community: What rights does a twice-convicted sex offender have and how much sympathy does he deserve?

Clayton Aaron Wheeler, 51, whose cause of death is still under investigation by the state, was convicted on two counts of indecent assault and battery on a child under 14 years of age in 2012 in Gardner and on three counts of unnatural and lascivious acts with a child under 16 in 2001 in Orange.

While some in the community have expressed outrage over expressions of sympathy for the homeless man after his death — discrediting a vigil held in his honor on the Greenfield Common Wednesday and a pending public forum with state legislators at Greenfield High School this coming Monday — his family, friends and social service advocates paint a picture that is anything but black-and-white. 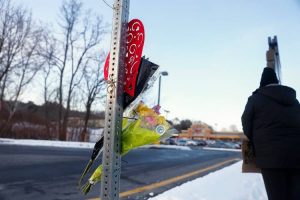 Clayton Aaron Wheeler and Kathleen Grady, who died this week, were known to panhandle on the traffic island at the Big Y Plaza where a memorial has been erected Friday in Greenfield.

Stable housing, along with having a job, is a key to reducing recidivism, Heather Bialecki-Canning, executive director of the North Quabbin Community Coalition said Friday. The coalition has worked since the early 2000s with local agencies and police on a sex offender management project. Annually the coalition provides a sexual offender “myths and realities” workshop, which will be held next month, to talk about what to do as a member of the community.

“I think all humans deserve a safe place to live, but I never want that at the risk of somebody else,” Bialecki-Canning said.

“What we know about sexual offending is the folks that are best at it are the ones who don’t get caught or are really difficult to prosecute,” she said.

Franklin County Sheriff Christopher Donelan said it’s extremely difficult to find sexual offenders housing when they are leaving the jail. Yet, not having housing can lead them back to the circumstances where the problems began or to homelessness, he said.

“The biggest conundrum with sex offenders, and this is not only housing but supervision in general, is no one wants them around but everyone wants them supervised,” Donelan said.

From a law enforcement point of view, he said it’s easier and can lead to better overall public safety, if the offender has a formal address.

“It may be appalling to people that sex offenders can qualify for public housing, but at least we know where they are and we can keep an eye on them,” Donelan said. “It’s emotionally charged issue and greater minds than mine haven’t been able to solve it.”

Irene Woods, director of the Children’s Advocacy Center that is under the Northwestern District Attorney’s Office, said there used to be more services in Franklin County for offenders. She said ultimately what was being offered was not very effective in preventing recidivism, although Woods said she believes there should be methods that work.

“The idea that we’re just going to have that person no longer in their life isn’t an effective solution,” Woods said. These situations often relate to familial circumstances that are tangled in personal connections that can be difficult to unweave, she said. “It’s just not black and white.”

The Opioid Task Force of Franklin County and the North Quabbin Region has heard similar issues with people in recovery who also are sexual offenders. Their key to finding stability in recovery can be finding housing, particularly sober housing.

“The Opioid Task Force has been working diligently with many partners to examine how street outreach teams can be positioned in the community to help respond to urgent individual and agency needs,” Coordinator Debra McLaughlin said in a statement, in coordination with the co-chairs of the task force, Donelan, Franklin County Register Probate John Merrigan and Northwestern District Attorney David Sullivan. “We are also deepening our efforts to increase the supply of sober housing, which has been identified as a huge gap here.”

In response to the two deaths, on Thursday City Council President Karen “Rudy” Renaud called for a public forum to discuss homelessness and sheltering in Greenfield, which will include state Sen. Jo Comerford, D-Northampton, and state Rep. Paul Mark, D-Peru, to be held Monday, 7 p.m. at Greenfield High School.

Renaud, when asked about whether Wheeler’s history as a sexual offender was relevant to her call to action on homelessness, said it was not at all.

“This is about not only Clayton, but the many, many other homeless people left out in the cold,” Renaud said. “What happened is forcing all of us to look at how we treat the homeless in our midst and what we as a community can do to make sure no one else is put in a dangerous situation.”

On Wednesday Renaud held a vigil on the Greenfield Common in honor of Wheeler and Kathleen Grady, who was found dead alongside him in a tent in the woods behind the McDonald’s on the Mohawk Trail.

The death came on a day of extreme cold with temperatures in the single digits.

Just a few days earlier, Wheeler’s ex-wife, Holly Wheeler, had called him up.

“I talked to him a few days before his death and he said he was going out to panhandle,” Holly Wheeler said. “I said, ‘Aaron, you don’t need to panhandle. You make enough money.’ He chose to do it because he said he needed to help his kids.”

His ex-wife, who remained in touch and friendly with him following their divorce in 2001 after being married for about seven years, said Wheeler, who was living on disability, wanted to help out his two sons in Greenfield. He would spend his disability money on food and on propane heaters for the tent, she said. He would then panhandle for money by Big Y Plaza to make money for his sons.

A memorial has been erected on the traffic island there that panhandlers frequent.

“He wasn’t feeling good. I said, ‘I think you shouldn’t be out in the cold in your condition. You’re not feeling good,’” Holly Wheeler said. “He said he needed to do it. He wanted to do it.”

Holly said Clayton had six children altogether. One of his sons, Garrick Choquette, said, “The only reason he was out there (in Greenfield) was so that Desmond and Zachary had somebody there to help them.” Choquette said he had offered him to come out and live with him in his condo in Haverhill. “He just wanted to grow old and be an old man and be a grandpa,” but was focused on supporting his sons.

Instead, Wheeler stayed out in his tent with Grady and declined to go into the ServiceNet overnight shelter, which offered him a place to stay in the already filled-to-capacity shelter that weekend.

ServiceNet, which runs the shelter at 60 Wells St. in Greenfield, does not bar registered sexual offenders.

“The purpose of the sheltering program is to meet the needs of the people who need it the most,” ServiceNet Vice President of Community Relations Amy Timmins said Friday.

Wheeler’s friend George Ballentine, an advocate for the homeless, said recently Wheeler told him he feels like “just another inmate number.” Services offered to him by social workers were often turned down, those close to him said.

Speaking about Wheeler’s sexual offender status, Ballentine said about his friend: “They get a label and people lose compassion for the person’s humanity.”

When Holly Wheeler found out about the death of her ex husband, it was Monday and over the phone. Their son Zachary called.