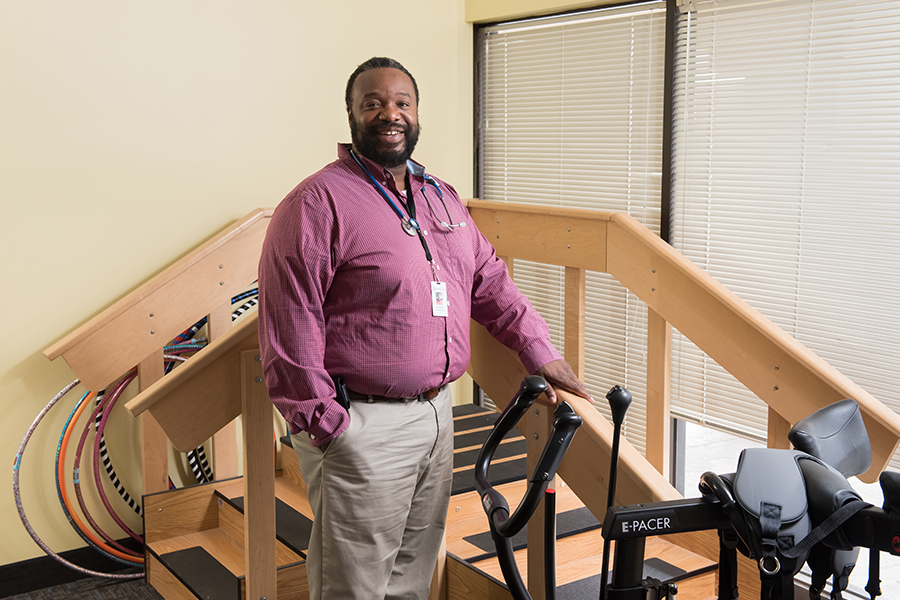 People living with the continuing effects of a brain injury – whether caused by trauma or a medical event – face daily challenges as they adjust to the injury’s impact on their lives and on their families. They may now need to re-learn skills and knowledge they once took for granted, including speaking and walking.

The individuals living in our residences and participating in our Enrichment Center come from diverse backgrounds; they have been store managers, students, construction workers, homemakers, and professors. Each brings unique experience and perspective to their recovery process, and our approach helps people make the most of their interests, strengths, and talents.

We work with family members and friends to support our program participants in living as independently as possible – scheduling regular network meetings, and offering educational sessions about various aspects of brain injury.

For further resources that may help in caring for a loved one with a brain injury, visit the Brain Injury Association of America’s website here: http://www.biausa.org/index.htm

ServiceNet has become widely recognized for the high quality of service we provide in our attractive residences for individuals with brain injuries. These homes are located in neighborhoods throughout western Massachusetts, and each is designed to provide the kind of comfortable atmosphere we would want for anyone we love.

In addition to these group residences, we provide several supported apartments and shared living options throughout the community. Supported apartments are an option for individuals who are ready to live more independently, with continuing support from our outreach team. Shared Living gives individuals with brain injuries the opportunity to live with people in the community who have chosen to open their homes and provide needed structure and support. Matches are often made based on interests shared by hosts and participants—from art, music, and sports to volunteering.

We provide hosts with training and ongoing support in their work with people who often struggle with some of the daily tasks of living.  Program staff help hosts facilitate individuals’ employment, health appointments, and recreation. Participants in the program have coordinated care plans, including clinical and rehabilitative support from providers at ServiceNet and in the community.

Shared Living may be an employment option for you if:

Hosts are paid a monthly stipend for their time, and receive funds to cover the individual’s living expenses. To learn more, contact the Human Resources office (413) 387-1110 or email jobs@servicenet.org

The Enrichment Center in Chicopee helps people with brain injuries to become more functional and engaged with others.  Participants are recognized for their unique talents, and are encouraged to share their knowledge with their peers.  Our goal is to provide a fulfilling experience for participants in their journey through rehabilitation and reintegration into the community.

Physical, occupational, and speech therapy are provided as needed, and are overseen by licensed professionals.

Social programming is flexible and dynamic, and participants choose from an array of activities at the centers as well as in their communities.  These include:

We offer several internship opportunities at the Enrichment Center in Chicopee, from one-day shadowing experiences to full-time rotations.  We are affiliated with educational programs from local colleges and universities, including Westfield State University, Springfield College, Bay Path University, and Western New England University.

Our interns work with their assigned supervisor to learn the skills and responsibilities related to their specific area of focus.  We offer structured observation, mentorship, and hands-on practice.

Brain injury services may be covered by the Massachusetts ABI/MFP, the Statewide Head Injury waiver programs or other waiver programs, worker’s compensation insurance, or privately funded contracts.  If the individual is ineligible for coverage, a daily fee is charged. All referrals should be directed to the program director, Ellen Werner at (413) 588-7235 or ewerner@servicenet.org

For more information about program eligibility for state funding, contact:

In 1989, when she was 36 years old, Virginia – a graduate of the Yale School of Forestry and Environmental Sciences – was happily married and had just started her own business. And then she was struck by a drunk driver. For two weeks she remained in a coma, and when she came to, everything had changed. She remembered no one, and her personality was extremely violent and combative. Though her family came to visit at the rehab center where she had been placed, the woman they knew had disappeared. And as the years passed, they drifted away. Ten years after the accident, Virginia’s husband filed for divorce—he’d given up hope of her ever recovering. By then, he had lost touch with the rest of Virginia’s family, and she had been moved several times between nursing homes. On December 2nd, 2015, she moved into ServiceNet’s beautiful new River Road home in Agawam, and the case record that accompanied her indicated she had no family.

But something didn’t add up. As Virginia became comfortable in her new surroundings, she would refer to staff members as Mom or Dad, and called some of them by other names which our staff began to suspect was not random. Program director, Lacey Woodrum, asked Virginia for her parents’ names, and Virginia was able to provide them—because, after just a month in her new home, Virginia had already become more lucid than she had ever been at the nursing home. Lacey then Googled those names so see what she could find. She discovered their obituaries, and in reading through the list of survivors, recognized the other names Virginia had been calling – her six siblings, all living in the same area, just a few hours from the home.

Other staff members took up the search on Facebook and found her brother Frank. “Do you have a sister named Virginia?” one staff member wrote, and five minutes later they heard back, “Yes! Where is she?” Frank was happy to learn that his sister was still alive, and Virginia was ecstatic when the staff told her they had found her brother. They made plans with Frank to visit, along with his wife and two sons.

The staff included Virginia in making these plans, and excitement built as the day approached. Staff members who were not scheduled to work came in anyway – they all wanted to be part of the reunion. When Frank and his family arrived, Virginia met her nephews who had been just babies at the time of her accident. The family brought several photographs and other mementos from Virginia’s past. Everyone was in tears. The family has come back again since, and other siblings have visited, as well. And Virginia’s life has been transformed. No longer reported “lost” by the Yale Alumni Association, she is receiving their magazines again; her speech has improved and memories have been flooding back.

Though still in a wheelchair, Virginia has been using her feet to push through the house, and even to kick a ball around in the yard. The staff at River Road are thrilled for her—the same woman who had been written off by one nursing home after another is now thriving.