After living with a hoarding disorder, Easthampton man helps others cope

Clutter throws Bec Belofsky Shuer of Easthampton into a panic. She says the sight of the hundreds of boxes filled with stuff, from old toys to empty picture frames, furniture — including an old beautician’s chair — a stack of tires and other random objects piled in her basement makes her nauseous. She can barely get around the mounds to reach her washing machine.

But at least it’s all downstairs.

There was a time, not too long ago, when the whole house was filled with things her husband, Lee Shuer, collected. She’d felt buried by the mountains of his possessions.

“It’s been a strange ride,” she said recently, as she and Lee sat in the now-tidy living room of their home. “It’s hard for me to believe that that’s how we lived.”

Lee Shuer, 42, has hoarding disorder, a condition that was officially recognized as an illness by mental health professionals in 2013. 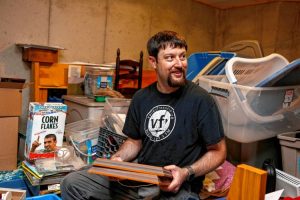 Lee Shuer of Easthampton, who suffered for many years from hoarding disorder, comes across several unused frames while sorting through items packed in boxes and stored in the basement of his home Aug. 25, 2017. Over time, he will decide whether to keep, sell, donate or throw away each item.

Hoarding disorder is characterized by a need to collect things that grows out of control, destroying relationships, threatening health — by creating unsafe or unsanitary living conditions — and even hurting financially, says Tara Ferrante, a mental health counselor at ServiceNet, a western Massachusetts-based social service agency. In some extreme cases, hoarders have multiple storage units, or even second homes that they have filled with stuff, she says. About 5 percent of the population have the disorder.

It can be an invisible problem, as some who have it are so ashamed of their cluttered living spaces that they keep family and friends out, Ferrante says. But Shuer has made his story public in an attempt to show others that there is a way to gain control. He has spent the last 12 years untangling himself from his possessions and he and his wife now run a consulting company, Mutual Support Consulting, to help others do the same. He also has paired up with Smith College professor Randy Frost, who has become a leading expert on hoarding disorder, and travels extensively speaking about it. On Oct. 18, they both will give talks at a conference in Hadley sponsored by ServiceNet.

“There is life after hoarding disorder,” he says. But it isn’t easy.

Over the last decade, Shuer has gone through the painstaking process of sorting through his piles of stuff, throwing away old junk mail, unearthing toys from his childhood and projects from elementary school. He has sorted through old postcards and bumper stickers. Things he has chosen to save are now neatly displayed in his home office.

But there is still that basement. It’s the last frontier. He is determined to clean it all out.

“It is like an archeological dig when you go through layers and find things,” he said as he sat on a bed frame in the basement on a recent Friday. Behind him were piles of empty plastic bins and crates that he has already emptied. In front of him was a bin for items he will donate to charitable organizations and another for objects to resell at a tag sale and a trash bag. There was also a bin for items he will keep. He inhales deeply, “It’s exciting — I just can’t wait to be done.”

For Shuer, it took an ultimatum from his wife to set him on the path to recovery. They were one year into marriage and he had stacked so many of his “treasures” into their apartment that it was an adventure just to get out the door, Bec Shuer says.

She finally she told him: “I just want to be with you and the world, not the stuff.”

That made him take a hard look at himself, he says. 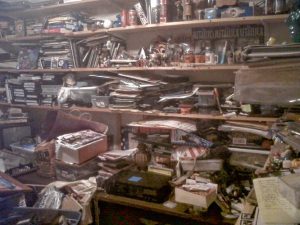 Bec was working as a therapist and case coordinator for children with autism for ServiceNet at the time and had received a newsletter from the agency that mentioned a Smith College study being conducted by Frost and his students. She recalls they were seeking subjects with a question: “Do you have too much stuff, do you need help?” She insisted Lee call the number.

A group of Frost’s students came to their apartment and interviewed him. At the end, they asked him to get rid of one thing that he thought he couldn’t live without: “I chose a sentimental shirt that I actually wore the first time I played violin out in public at a rock show,” Lee said.

Though at first he felt high anxiety, over the weeks, the distress faded. He realized he could start parting with things.

“That saved our marriage, right there,” Bec said.

“I basically read the book, read it again,” he said.

He stopped picking up free stuff on the side of the road. Instead of visiting tag sales, he began holding them. Slowly, he gained control of his living space.

Hoarding disorder is not well understood, says Frost, but there might be a genetic component as well as some difference in the wiring of the brain impacting the way information is processed. The condition probably has been around since humans started acquiring possessions, he says, but it wasn’t until 2013 that is was added to the “Diagnostic and Statistical Manual for Mental Disorders,” published by the American Psychiatric Association. 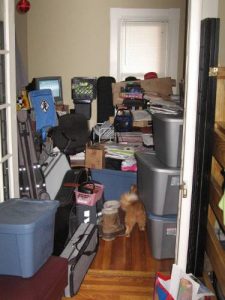 Frost says he and his students were among the first researchers to study it. In the early 1990s, one of those students asked him about hoarding. He says he told her that no studies had been done on it and he suggested she do one. “We put an ad in the Gazette (seeking subjects) and we got 100 telephone calls,” he said.

That started the first systematic study of hoarding, he says. Since then research on this topic has been a runaway train, he notes.

Still, few mental health professionals know how to treat it, Frost says. That is something he hopes to change by training professionals, as well as helping sufferers.

He and Shuer have designed a course called “Buried in Treasures,” a 16-week program based on Frost’s book. It teaches people how to recognize the emotions that prompt their need to obsessively collect and to set goals for defeating the clutter. For the last six years, the pair has traveled around the world teaching.

Shuer, who has worked as a counselor in the past, has no formal training in treating hoarders, he says, “It is all just school of life.”

As Shuer sorted through the bins in his basement on that recent Friday, he reflected on the beginnings of his compulsion.

He thinks it started as early as age 3. “I went to a neighbor and asked him if he had any old stuff that he didn’t need,” Shuer said. The neighbor rolled out a push mower.

“That was the first big acquisition, a push mower, which was probably a hazard, but my parents let me keep it.”

Then he got a stamp collection from his grandfather. Too young to buy anything, he started collecting things from the natural world, like rocks and sea glass. Then came a baseball card collection. At this point, everything still felt pretty normal, he says. His mother made him keep his room clean, so things never got out of hand.

That is until he graduated from the University of Massachusetts in Amherst and moved into an apartment in Northampton.

“When I had the space and time and money and a vehicle – it just exploded,” he said.

He worked out a deal with his roommates to allow him to have an extra room for his things. “That room became the museum room,” he said. There he had Atari video game consuls, PAC-MAN posters and Super Mario Bros. action figures. It was filled with “vintage everything,” he said.

When he stopped at tag sales, he would buy anything he found visually appealing or things he thought he might be able to resell, like housewares from the 1970s.

At first it was fun, he says. He would get a sense of satisfaction when buying something, but by the time he met Bec in 2003 his collections had poured out into the hallways in his apartment and were more of an embarrassment than anything else.

When he and Bec married and moved into a studio apartment in 2005, the stuff moved in with them and Shuer fell further into a vicious cycle: when he felt down, he would go treasure hunting, looking for “eye candy” or anything that was “kitsch.” He came home with lava lamps and T-shirts that had funny slogans on them, but were not his size. The apartment became like a packed storage space.

“I was terrified and mortified and nervous,” Bec said. “To get out of the house, to get anything, it was a squeeze.” 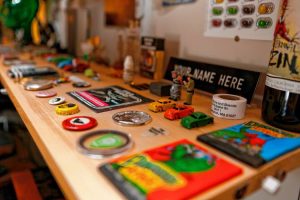 Some items from Lee Shuer’s collection are displayed in his office Aug. 25, 2017 at his Easthampton home. For many years, Shuer suffered from hoarding disorder. The room was once filled with stuff but now features only select items he has decided to keep.

When she finally laid down the law, Lee did some serious introspection. By studying Frost’s book, he learned to identify the triggers that make him want to collect. In the past, just seeing an object he found interesting might spur him into a buying spree. These days, he is able to walk through the Goodwill Store in Northampton and instead of buying that Walking Dead bobble head or the funky lamp, he will snap pictures of them.

He also learned that instead of holding onto a sentimental object, he can make a scan of it or take a photo of it, and store it in his computer.

When he heads down to the basement to organize — sometimes once a day — he has a plan of action, focusing on one area and categorizing the objects: keepers, donations, tag sale bound or trash.

Much of the work is just analyzing and thinking about why he wants to keep things he says.

“People have to challenge their beliefs about their attachments. If you thought you couldn’t live without it, prove to yourself that you could. That is the leap of faith that I took.”

He is happier now and focused on enjoying life with his wife and their two cats. Their living room and kitchen are sparsely furnished and attractively decorated. The only thing on the floor is a toy mouse for the cats.

There is a glittery lava lamp in the corner of the living room, one of the few reminders of the past.

Lisa Spear can be reached at Lspear@gazettenet.com

The Buried Treasure Workshop offered through ServiceNet starts Sept. 18 in Northampton and runs for 16 weeks on Mondays from 5:30 to 7:30 p.m. For more information or to find our more about individual counseling or group therapy, contact Tara Ferrante at 587-7731 or tferrante@servicenet.org.

A conference on hoarding hosted by ServiceNet takes place Oct. 18 at the Hadley Farms Meeting House in Hadley. The registration fee is $85, and continuing education units (CEUs) are available for professionals. To register, go to: www.eventbrite.com/e/htf-hoarding-conference-tickets-36609791873 or see the Event listings on ServiceNet’s Facebook page.