0
BY DAVID MCLELLAN
THE RECORDER

“I was like a kid under the Christmas tree on Christmas morning,” Cabral said, his face lighting up while recalling that special moment.

Cabral knows himself well, describing himself as a perpetual “outdoors kid.” He knows the right place for him is working in the fields, working with soil, plants and produce so he can “reconnect with the Earth” and contribute to society as a farmhand delivering food. 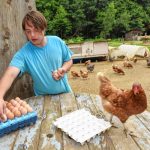 But it hasn’t always been easy for Cabral, or the dozens of other workers at Prospect Meadow Farm on Prospect Street in Hatfield, who all have developmental disabilities or autism, to find work.

The sprawling farm employs people from ages 18 through 60 with a variety of developmental disabilities or autism and sees the full production and sale of winter squash, tomatoes, cucumbers and a variety of other produce, as well as shiitake mushrooms, eggs and even greeting cards. Since launching with just a few disabled people from ServiceNet working at the Prospect Street farm, Prospect Meadow Farm now employs around 75 people and has opened a second location in the last year — Prospect Meadow West — on Route 5 in West Hatfield.

“There’s something special about working the soil and working outdoors,” Robinson said. “Sometimes with people with autism, they might have a sudden need to sprint across the field. That isn’t possible in other environments, but here, we’re already outside.”

Those who aren’t as excited about learning farming skills at the original location, Robinson said, are posted at Prospect Meadow West, where they learn business and management skills at a small store. 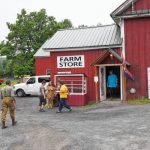 The Prospect Meadow Farm Store on 5&10 in Hatfield.

“Most of the people who come here are referrals from (the Massachusetts Department of Developmental Services), but people also are sent to us from school districts, like Frontier, Mohawk, Northampton,” Robinson said. “They are all learning safety skills, vocational skills, team building.”

Most of the workers are younger, in the 18 to 35 age range, Robinson said. Those who have just recently graduated high school may have already shown an interest in farming, but “need to learn the skills.”

On a given day, roughly 25 people are at the farm doing everything from landscaping to tilling the earth and sowing seeds, and another 25 are at the farm store at Prospect Meadow West, where the workers are either in the store, working with animals like goats or taking part in the farm’s culinary program, learning cooking and kitchen skills.

At both locations, workers are divided into crews. According to Robinson, this format allows the farmhands to develop social skills as well as technical skills. Also, individual farmhands can work their way up to becoming crew leaders, developing important leadership skills, Robinson said. All employees are paid $12 an hour.

Recently, ServiceNet partnered with Workforce Opportunities Unlimited (WOU), an organization that will help place the more experienced farmhands from Prospect Meadow Farm in permanent jobs. Robinson said he expects the first eight farmhands to move on to new employment by January, after which the next eight will begin working with the workforce opportunities organization.

It’s a process that still needs definition, Robinson said, but given that Prospect Meadow Farm has grown so much in the last eight years, he said he is confident it will continue to evolve into a vocational skills training program that pays its workers and then helps them move on to more permanent employment.

Shawn Robinson runs the Prospect Meadow Farm in Hatfield that employs people with developmental disabilities and autism to raise a variety of products.

Robinson — who has a background in community and political organizing, and was an intern at ServiceNet before the farm started — said a large part of Prospect Meadow Farm’s success is that it gets workers exposed to social situations requiring teamwork, just like they would run into at other jobs.

“We had one worker, when he first started, anytime we were doing a tour like this he would run in (the farmhouse) and hide,” Robinson said. “It was social anxiety brought on by this social setting. Now, if he were here, he’d approach us and say, ‘Hi.’”

William Matthews, AGE, who is originally from New York but now lives in Springfield, is one of Prospect Meadow Farm’s workers. He said he appreciates that the farm has allowed him to develop a specialized skill — growing shiitake mushrooms — and hopes to demonstrate he is able to become a “senior farmhand,” and manage a crew of other workers.

Matthews also said the program, by providing jobs as farmhands, allows people who are receiving services from ServiceNet to become workers at that very organization. He also takes pride in knowing the food he grows ends up at restaurants or stores like Hillside Pizza, Fishtales Bar and Grill or Muffin’s General Market.

“We don’t count as clients anymore,” Matthews said. “We count as staff.”

E.J. Miranda, of Springfield, is another farmhand who started working at the farm five years ago picking vegetables, but who now focuses mostly on landscaping work.

“I enjoy it. I met some friends when I first came here. When they got to know me, they know I’m a nice guy,” Miranda said. “I like to help out and be a good role model.”

Food from the farm, besides going to the farm store at Prospect Meadow West or sold to other stores, also ends up on the tables of those who own the farm’s 40 shares under the Community Supported Agriculture (CSA) state program.

Robinson said he hopes and expects the operation to continue to sustain itself, grow and someday serve as a model operation for other social services organizations across the state. It allows people to learn vocational skills useful in a work environment and get paid doing so, but, along with the structure, provides freedom for the farmhands to discover what aspect of food production or landscaping they might like best.

Greenfield’s Chelsea Ennis started working at Prospect Meadow Farm several years ago, but didn’t take to the field work required. She transferred to Prospect Meadow West — just a few minutes’ drive away — where work was more suitable to her background with equine therapy. Ennis wanted to work with animals, and now works with the farm’s goats.

Importantly, she also found a close-knit group of friends to share the work with.

“We all develop friendships,” she said. “We work as a team. There’s emphasis on work, but there’s also emphasis on the social setting, and it’s nice getting outdoors.”

Staff reporter David McLellan joined the Greenfield Recorder in February 2018. He covers Orange, New Salem and Wendell. Reach him at dmclellan@recorder.com or 413-772-0261, ext. 268.