GREENFIELD — Rose Facto, acting director for the county’s only homeless shelter, receives at least 15 calls a week from people asking for a place to sleep.

The shelter, located at 60 Wells St., has 20 beds in two rooms: 14 for men and six for women. Run by the non-profit ServiceNet, the one-floor facility is the only homeless shelter in the county that caters to individuals.

While summer at the Wells Street shelter has been quiet in previous years — with wait lists of a few or even zero — this June and July, there has been more demand for beds than ever before. About 25 people are on the wait list, instead sleeping in tents, under bridges or in church alcoves.

“I’ve noticed that we’ve had more calls for the summertime,” Facto said. “Hard times, that’s all I can think of. Losing jobs, housing. I don’t know.” 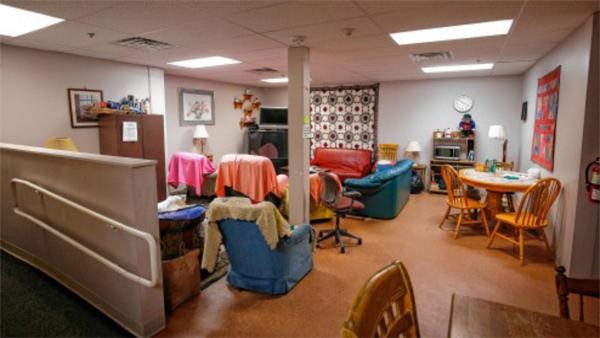 Most of the time, Facto has to tell the person on the other end of the line that they have to join the wait list. She said before people arrive at the shelter, many have been living on the street for “months, years.”

Facto said it is tough to turn people away, especially as she was once homeless. But there is little else she can do aside from add people to the wait list, she said, and call when there’s space. As ServiceNet’s other shelters in Pittsfield and Northampton have similar queues, there are very few back-up options.

“You can’t even direct them to another shelter, because there isn’t any,” Facto said. “It’s hard … especially when you have someone calling, crying.”

Jay Sacchetti, vice president of sheltering, vocational and substance use services at ServiceNet, said he has seen a steady rise in shelter usage over the past few years. In fiscal year 2017, 77 people used the shelter. The following year, 87 people came through its doors. And in fiscal year 2019, that number rose to 118.

Meanwhile, people are staying at the shelter for longer periods, Facto said. One Wells Street resident recently surpassed 500 days at the shelter, she said.

While obstacles are complex and will take time to address, in the short term ServiceNet is working on increasing the number of winter shelter beds in Franklin County following two January deaths. Kathleen Grady, 50, and Clayton “Aaron” Wheeler, 51, died while staying in a tent in a wooded area near the Greenfield rotary, on a night when temperatures dropped to single-digits.

After these deaths, the Wells Street shelter opened its doors to anyone in need of refuge during the remainder of winter, causing the modest one-floor space to become overcrowded with people, Facto said. At its height, the shelter had about 45 people staying there, Facto said, sleeping on couches and chairs and on the floor. About 15 people were sleeping in the living room, she said.

Sacchetti said he is now working with lawmakers, the city and other local advocates to find an idea to increase shelter beds for winter — plus the money to fund it.

One idea that has been raised, Sacchetti said, is to renovate and open the second floor of the shelter, which has been empty since the shelter opened. A renovation is estimated to cost $150,000, he said. The Greenfield City Council previously said it would give $50,000 to the project, however Sacchetti said officials have not indicated whether this offer still stands. 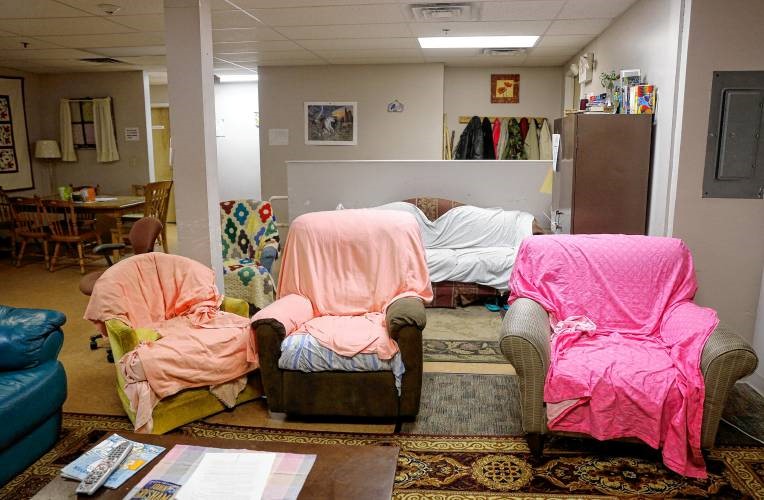 Facto expressed strong support for opening the second floor of the shelter.

“That would help, that would knock our waiting list right off,” she said.

Money is a persistent problem for ServiceNet, Sacchetti said. The non-profit receives 65 percent of its funding from the government and is left to come up with the remainder on its own. Late last year, a lack of funding led ServiceNet to close two “permanent supportive houses” on Fort Square and Sanderson Street, and relocate the 14 residents who lived there. ServiceNet has one permanent supportive house with five beds remaining, on School Street.

ServiceNet runs one other shelter in Franklin County, the Greenfield Family Inn, which only accepts families (who have a right to housing under Massachusetts state law). The non-profit also runs two “recovery houses” in Franklin County — in Greenfield and Orange — a residence available to those in the early stages of recovery from substance use addiction. And the organization also runs a housing program in Turners Falls for those who have completed a treatment program and “want to live in a sober environment with continuing case management and other supports,” said Amy Timmins, ServiceNet vice president of community relations.

There are many reasons Franklin County residents turn to, and then rely on, the Wells Street homeless shelter, Facto said. The main reason, she said, is the high price of rent, averaging $864 per month, according to data from the U.S. Census Bureau collected from 2013 to 2017.

Aside from money, there are some social obstacles to obtaining housing. Landlords and employers may be less likely to hire or rent to those who do not have a rental or employment history, who are struggling with addiction or who have been incarcerated, the Opioid Task Force of Franklin County and the North Quabbin Region noted at a June meeting for landlords and tenants. 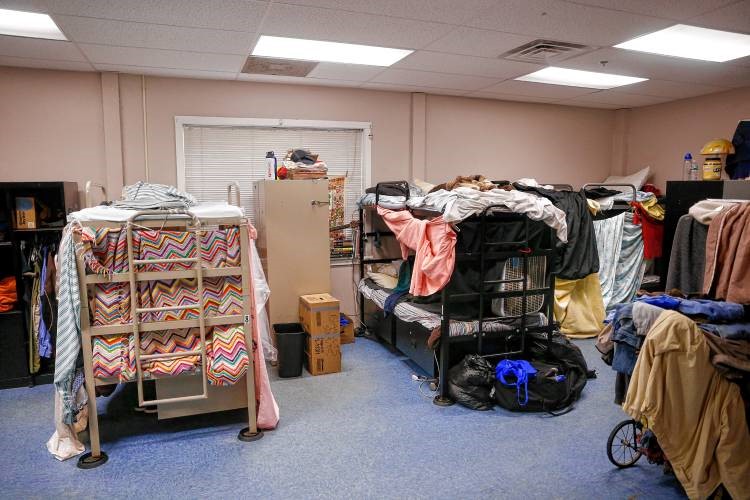 Another way to secure subsidized housing is to apply for the Section 8 Housing Choice Voucher Program. Run by the federal government, this program subsidizes rental units for low-income individuals and families. But Section 8 vouchers have years-long wait-times, too, Facto said.

A current resident of the Wells Street shelter, Merilyn Haskins, 62, had been on the wait list to receive Section 8 housing for six years, she said.

Finally, a couple of months ago, she was issued a voucher. But even with one, she said finding housing has been tough.

“I’m doing the best I can do,” Haskins said. “There ain’t nothing out there.”

Rory Anderson and Rhonda Ely, long-term partners who both live at Wells Street, said they were relocated to the shelter after Sanderson House closed late last year.

Anderson said “everyone” at Wells Street has applied to receive a subsidy as part of the Section 8 program. Ely applied for a subsidy in February, though she said she hasn’t heard anything yet and doesn’t expect to any time soon, given there is “like a five-year waiting list.” She added that she receives $800 per month in social service money; not enough to cover rent in Greenfield.

“It’s really hard, when you have minimal income, to find a place,” Ely said. “Most apartments around here are going to run you anywhere from $1,200 to $2,000 a month, and that’s with nothing included. It’s really, really hard.”

Before they secured a place at Sanderson House and then at the Wells Street shelter, the two said they lived in a wooded area in Greenfield for about three years. Ely noted that there are many homeless people still living in the woods. 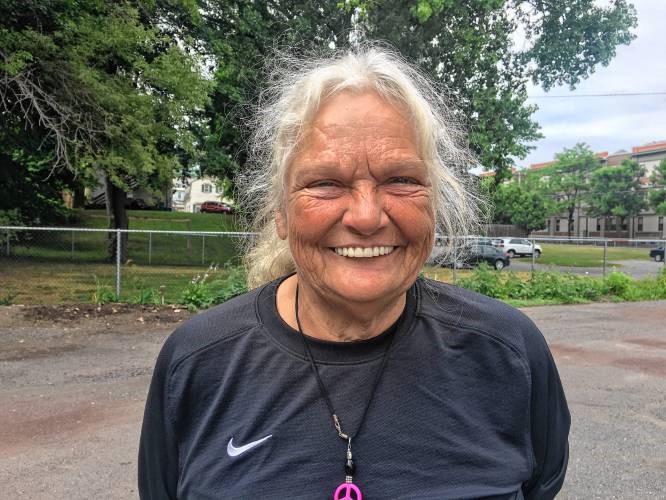 This summer, the shelter has been unusually busy, with an average wait list of about 25 people.